Skip to content
Some of you DIY. I DAMO. I DAMO myself to hell.

I put a bit of a thumb on my fingerless mittens, as I documented in last week’s entry and my future book KnitPick and Other Ways I’m Not Cool. It looks like a botched circumcision.  Despite this, and the fact that I managed to pick up 947 stitches around the thumbhole, I’m wearing them except when eating, anywhere near water, or in public. 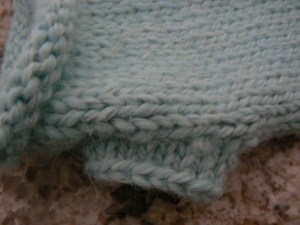 I also started my second Charly Infinity Scarf. I am using Berroco Souffle in a striped color pattern that will make my sternum look fat.  FACT.

On the baking front, my son Mac N’ Cheese actually had three helpings of meatloaf the other day.  I was hopeful, then, when I made a spaghetti bake last night. “Spaghetti Bake” is internetspeak for “I’m too lazy to make lasagna.”  Noodles, sauce, cheese, beef.  All the things Mac N’ Cheese and his brother, Freaky Broccoli Lover, enjoy.

Layering the ingredients, though, was completely unacceptable.  Picky and Pickier poked at it and declared that it “looked disgusting.”  After being encouraged  to try it, I heard, “Well, I kind of like it, but I mostly don’t.”  I told them to go audition for an AT&T 4G commercial, where that kind of doublespeak is the stuff of hilarity.

The joke will be on me, of course, as I now have 89% of a Spaghetti Bake to eat on my own.  Mr. Pickadilly has asked for the Spaghetti Bake Immunity Necklace.

In an effort to woo my ever-grateful offspring back to the table, I made something called “Homemade Twix Bars.” I’d link the recipe, but the Junior Reviewers put up a Yelp review that went something like this:

“After a disappointing, disgusting NOT-spaghetti dish, the chef tried to erase the abortion of an entree with an equally gross dessert. The best thing we could say about it is that we managed to wrap it around our fingers. Literally.  Stick to real Twix, chef.  We did like that this restaurant has a very relaxed dress code (the diner in the high chair next to us was shirtless) and service was swift, especially when we repeatedly spilled our milk.  2 stars out of 5.  We recommend requesting the off-the-menu speciality of peanut butter and jelly between two slices of bread.”