Sundays are a good baking day. This one was especially good.

Having gone pumpkin picking and apple buying (due to small crops, all u-picking was forbidden this year. Apples were all picked professionally and bagged for sale to maximize profits. Sad.) on Friday, there were pies to make.

As I do not have the motivation yet to perform an autopsy on a pumpkin, I stuck to apple, the tried n’ true pie from the Baked book.  For the first time I made my own pie crust. Yes, walking on the moon, polio vaccines, the wheel, and my pie crust…greatest human achievements ever. Take your space program and put it in my flaky crust.

Why stop with pie? As long as the oven is on…I pulled out a rather eerily unbranded box of pumpkin muffins (with cream cheese stuffing!) that I nabbed from Target last week.

My hopes were low, especially as the instructions, which clearly called for “stuffing mix” (also, ew), but the mix was labeled frosting mix. 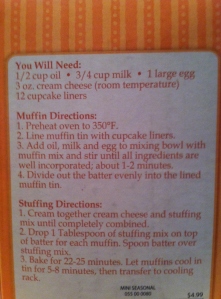 I persevered.  Muffins were made and devoured.  Really good job, nameless brand. Unless “Pumpkin” is the brand, which would be kinda lame. 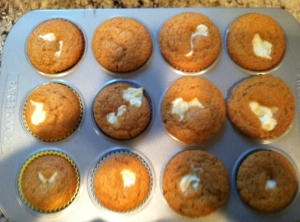 And to go with the evening’s chili, I made cornbread. From a Costco Mix. Of which I don’t have a picture. It’s good. Eat it.

And so, my friends, no major catastrophies in the kitchen this week. Tune in next time…