All in all, I think I’m doing fairly well as a parent. My sons are thriving in school this year. No worries, no nightmares, no accidents — and they’re fine too.  (Nyuk, nyuk.)  Their teacher identified them as gifted, with all the wonders and baggage that go along with that. She is unfazed by their energy, she is motivated by their abilities, and she is responsive to their curiosity.  They’ve made friends, they are loving and sweet here, and in good health overall.

But today. Man. It was like we regressed six months. They decided today was the day to wrestle each other. Literally. Figuratively. Every which way.  One atop the other.  The proximity seemed to have dulled their sense of hearing (especially me) and sharpened their sense of mischief.

The wrestling and willful ignoring would be fine if they didn’t also do it at swim class. In the pool. How do four-year-olds wrestle in a pool, you may ask? Quite skillfully, actually.  Their poor teacher, a college sophomore most likely hungover and wrung-out at 9am on a Monday was less than impressed.  I was, in a word, mortified.

After a good old-fashioned “talking to” in the changing room, we went out to the car…where it all started again.

Stacks were blown. Apologies made.

And then they snapped out of whatever reverie they were in and returned to our new normal. They helped. They canoodled. They snuggled. They talked nonstop. They woke me up from nap. They explored. They played football. They wrestled some more.

And, quite frankly, I’m looking forward to bedtime and a celebratory glass of port.

What am I celebrating? Survival. Thriving. And someone’s 6-month birthday! 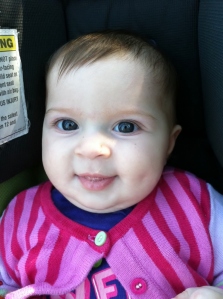